"Standing up for trade union rights: past, present and future" 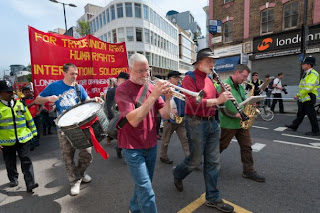 I will be going along to this event on Thursday night organised by the Institute for Employment Rights and the Haldane Society of Socialist Lawyers. As a UNISON member and Treasurer of the Green Party Trade Union Group, I am very interested to hear what Len Mc Cluskey in particular has to say on the future of the trade union movement during this period of real attack on workers rights and the trade union movement. With massive layoffs in the public sector being announced every day and the decimation of public services the role of the trade union movement is going to be vital The next test will be on June 30th and the national strike in the public sector over pension rights.
The Institute of Employment Rights & The Haldane Society
Invite you to hear:
Len McCluskey, General Secretary, UNITE in conversation with Sally Hunt, General Secretary, UCU
“Standing up for trade union rights: past, present and future”
chair: John Hendy QC
Thursday 26th May 2011, 6.30—8.30 pm
At Congress House, Great Russell St, London WC1B 3LS
Nearest Tube Tottenham Court Road
http://www.ier.org.uk/ www.haldane.org
2011 is an important anniversary year for the trade union movement. It marks
• 100 years since the 1911 Transport Workers strike
• 50 years since the Council of Europe’s Social Charter
• 25 years since the Wapping dispute and
• 10 years since the Friction Dynamics Strike.
2011 also promises to be a year of struggle as unions fight to defend jobs, pay, pensions and services.

So what lessons can we learn from our past to inform our future?

Two trade union general secretaries at the centre of current struggles offer their thoughts in this 2011 In Conversation event, Chaired by John Hendy QC.
Free Admission but pre-booking essential. To reserve your places email office@ier.org.uk
This event is kindly sponsored by OH Parsons, Old Square Chambers and Thompsons Solicitors.